In this guide we round up the best Animal Kingdom rides for toddlers alongside some of our top tips for visiting the park with preschoolers.

Important Note: This post may contain affiliate links which means if you click through and make a purchase I will make a small commission at no extra cost to you!

Now the truth about visiting Animal Kingdom with toddlers is that rides may not be the main activity during your stay. Animal Kingdom actually has the fewest rides of any of the parks. That is because Animal Kingdom is a park that is more than just rides.

There are five main areas at Animal Kingdom. These are:

While Children will enjoy all of these lands and theming the areas that have rides that toddlers can enjoy are Pandora, Africa and Dinoland USA.

Out of all the areas in Animal Kingdom, I think that Pandora – World of Avatar is the most popular. You will find that if you rope drop Animal Kingdom that most people will head straight to this area.

There are only two rides at Pandora –

And only one of these is suitable to do with toddlers – that is the Navi’i river ride.

This is a dark ride in the Pandora area. Guests will board a board (similar to boats used in It’s a Small World and Pirates of the Caribbean), and are taken on a tour of Pandora.

On the ride you will see the native flora and fauna of Pandora and it’s animal life that is brought alive through a mixture of digital works and animatronics.

My toddler, who admittedly gets nervous on rides, absolutely adored this. Although it is a dark ride there really is nothing scary and the ambiance is actually quite calming.

Toddlers will love watching the bioluminescent flora and see the beautiful lights along with the relaxing music.

This is an absolute must for those visiting Animal Kingdom with toddlers.

Tip: if you do decide to rope drop Animal Kingdom I recommend heading straight to Pandora as this is the longest walk in the park and is the area where queues get the longest.

I headed straight onto flight of Passage with my six year old while my husband and toddler headed t the Na’vi’ River Ride. When we then rider swapped I took my toddler back on this ride and he just adored it. This has to be the best Animal Kingdom rope drop strategy.

The Triceratops Spin is a great toddler friendly ride in the dinoland area of Animal Kingdom. This ride is similar to Dumbo the flying Elephant ride and the Magic Carpets of Aladdin in Magic Kingdom.

Instead of flying around on elephants and carpets however in this instance you will fly around on Triceratops’.

Another great thing about this ride is it’s queue doesn’t tend to get too long especially in the mornings in Animal Kingdom.

In some ways I don’t like to include Kilimanjaro Safaris in the round up of toddler rides at Animal Kingdom as I really don’t think this is a ride. For me this is more of an attraction but that is another thing.

The fact that Disney includes this as a ride and it is part o the Genie + system at Animal Kingdom I have included it here.

The Kilimanjaro Safari is a traditional  safari experience. You board a enlarged jeep type vehicle and go on a 20 minute drive of the Savannah area.

Animal Kingdom Kilimanjaro Safari is the perfect mix of edutainment and introduces children to the animals on the safari in a really engaging way.

I will admit that my toddler can be a bit fidgety bit he sat beautifully throughout this ride and was fascinated by all of the creatures on offer.

No visit to animal Kingdom with toddlers, or even without toddlers is complete without having done the safari ride.

However if you are visiting with toddlers there are definitely some tips for maximising your enjoyment.

Firstly it is worth noting that this is one of the few queues at Disneyland where you don’t have to use stroller parking before you enter the ride queue. You can actually do a large part of the queue with your toddler in the stroller.

Once you reach the half way point of the queue a cast member will then take your stroller and park it for you. For more Disney stroller tips be sure to check out this post.

Another tip for those traveling with toddlers is be aware that this attraction once you board is around 20 minutes long. And it can be longer if an animal strolls onto the path. The animals are free roaming so if one decides to stand in front of your vehicle you will have to be patient and wait it out.

For this reason we advise planning to ride this when your toddler isn’t tired and not about to nap as they will be cranky and it will definitely ruin your experience.

Another of the Africa “rides” that toddlers can go on is the wIldlife Express train. Again this isn’t a full on ride but more of an attraction but your little one is going to love it.

This ride actually transports you to the Rafiki’s Planet Watch area of the park and the journey takes around 7 minutes.

Rafiki’s Planet Watch area once you arrive then has lots of things that your toddler will love including:

However if you want to do this make sure you know what time the last train to the area is. On our last visit the last train ride across to Rafiki’s Planet Watch was at 12:30 so a lot of people who came in the afternoon were left disappointed.

It’s Tough to be a Bug

It’s Tough to be a Bug is actually a 3d show similar to the Mickey’s Philharmagic in Magic Kingdom. Guests will be asked to don 3d glasses for the experience

And while there is no height restriction to this attraction it is worth pointing out that there are bugs and lots of darkness in this attraction which could scare some smaller and more nervous guests.

If your little one doesn’t like the dark then I would definitely avoid this one.

Also please note this attraction lasts for just under nine minutes so may not be great for little ones with very short attention spans.

And there you have it, those are all the rides at Animal Kingdom that toddlers can go on. After these the height restrictions get quite high i.e.

Do you need Genie+ for Animal Kingdom Rides with toddlers

Out of all of the parks I would say that Animal Kingdom has the least need to Genie +. The reason for this is because there are a lot fewer rides at this park.

However if you want to ride a few of these rides twice i.e. Na’vi River Ride and the Kilimanjaro Safaris this can be useful. If this is your plan I would recommend that you ride the rides first without Genie+ while the queues are shorter and then use Genie+ later in the day when the lines have got longer.

Other things to do with toddlers at Animal Kingdom 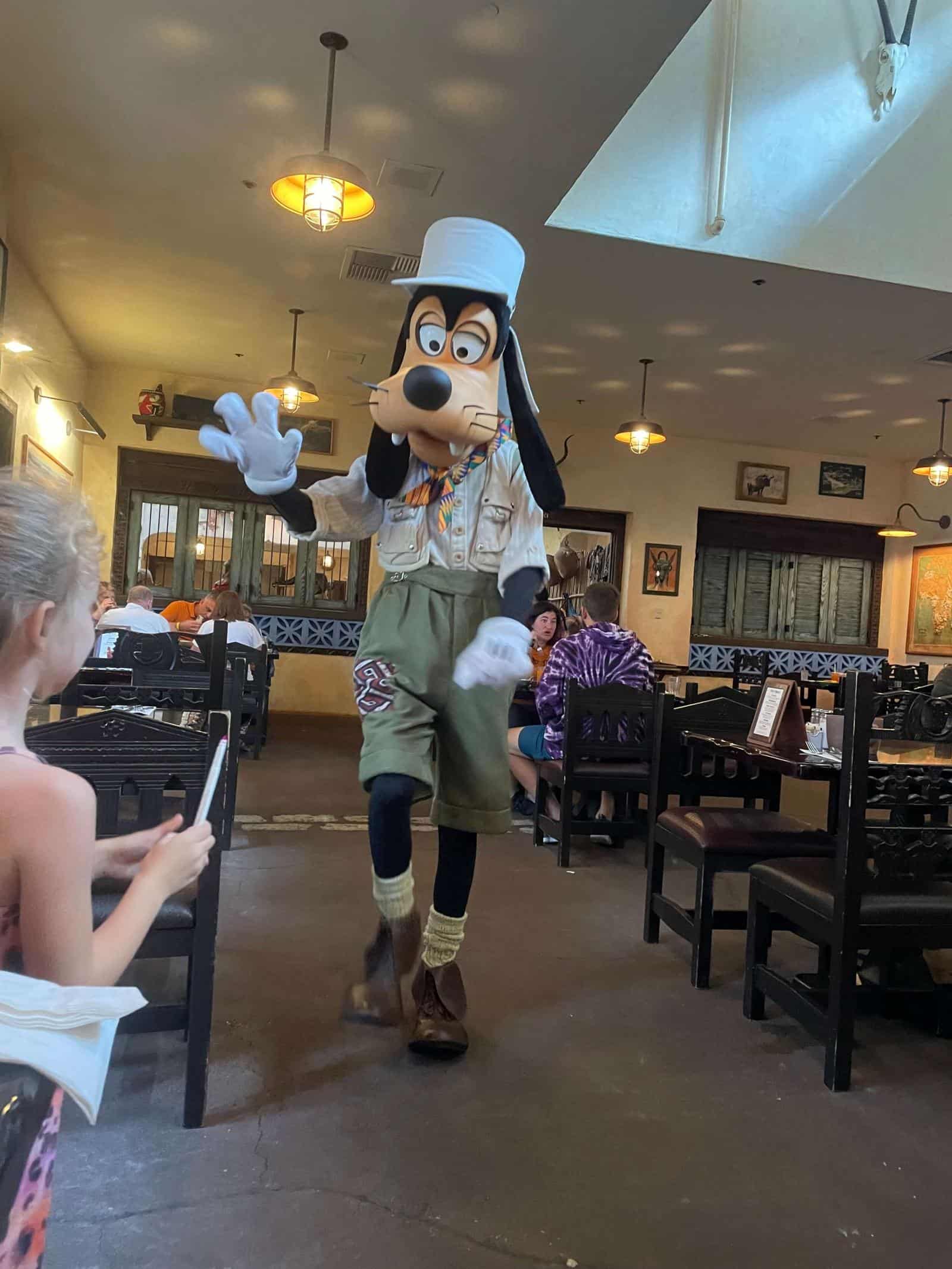 However just because there are only a hand full of rides for toddlers at Animal Kingdom, it is worth pointing out there are lots of other things to do in Animal Kingdom with toddlers such as:

Shows at Animal Kingdom for Toddlers

The shows in Animal Kingdom that your toddler may enjoy include:

Festival of the Lion King

A condensed version of the Lion King with lots of music. Note: this is very popular so be sure to join the queue early to avoid disappointment.

A musical version of this Pixar classic

But please note that both of these shows run past 30-40 minute mark which can be challenging for some toddlers.

My son loved this as birds swoop over you very low during the show. He was absolutely fascinated. But if your little one doesn’t like things flying near them you may want to sit near the back.

One of my toddler’s favorite things to do at Animal Kingdom (after the Kilimanjaro Safari and NA’vi River Journey ride) was the Boneyard playground.

This outdoor playground is themed after an archaeological dinosaur excavation.

It is an absolutely huge playground with lots of slides, ropes for climbing  and of course a dig area. Toddlers will love this and you will find it difficult to drag them away.

We usually use this area to let our toddler blow off some steam while we rider swap Dinosaur which is relatively nearby.

There are three exploration trails at animal kingdom that toddlers will love including:

We love these areas as they are great places to let your little one get out of the stroller at Disney and blow off some steam.

There is also Rafiki’s Planet Watch which has a petting zoo and conservation area including a veterinary area which my six year old adored.

Meet and Greets at Animal Kingdom for Toddlers

Meet and Greets aren’t as big a thing at Animal Kingdom as in Magic Kingdom or Epcot for instance. But there are some.

We met several characters from Up in this park and enjoyed character dining with the classic characters in Safari gear at Tuskers House.

For a more complete guide on visiting Animal Kingdom with toddlers be sure to check out this guide.

We’d love to hear what your favorite Animal Kingdom ride with toddler is? Please let us know in the comments below.